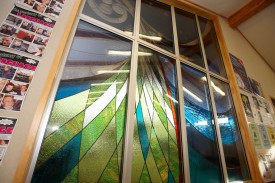 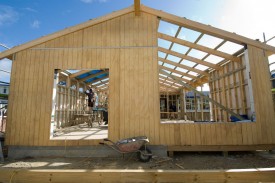 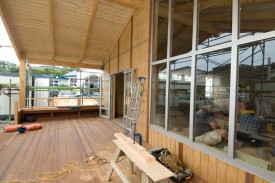 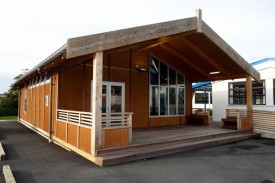 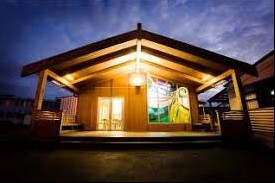 The College’s Wharekura, Te Ao Mārama was opened in a dawn ceremony on May 10th 2007 after several years of planning.  Historically the site was the home of a dilapidated, 40 year prefab that was close to being condemned.  The Māori students had been surveyed on several occasions about how their learning could be helped and the consistent message was that they wanted a place that they could be proud of.

After much haggling with the Ministry of Education (who does not directly fund the building of Wharekura) the necessary funding was secured. Board member Wayne Firmin (Te Ati Haunui-a-Paparangi), and property manager John Te Morenga (Ngā Puhi), with input from the Principal Grant Jones, and the teacher of Te Reo Māori, Craig Fransen (Ngāi Tahu) drove the project - Me mihi ka tika ki a koutou katoa.

Gary Edridge the principal architect from Re-Design who had completed a significant amount of design work for the school engaged in a long consultative period to ensure that design was culturally appropriate and met the needs of the school.   The final design had many features that makes Te Ao Mārama very special. As is appropriate, it faces the entrance to the school and is the first building that visitors will sight. Its Paepae is positioned to easily welcome them. The interior height is oversized so that it can accommodate kapa haka and reflect the features of marae.  There is ample storage for resources, taonga and rauemi kapa haka as well as a staff planning room. This room also contains a small kitchen to ensure that the requirements of manaaki manuhiri can be fulfilled. A later addition has provided plastic screening so the veranda can be closed off in bad weather. Next to the veranda a small enclosure has been created to hold performances.

One of the special features of Te Ao Mārama is a large stain glass window which is back lit at night.  It was designed by the Art teacher Lara Anderson and it depicts Matariki, as well as Te Haerenga, the journey our young tauria undertake as they gain their education. It also captures the story of Ranginui and Papatūānuku and how they were forced apart by Tāne-Mahuta, letting light into the world.  Hence the name Te Ao Mārama, “the world of light”

Newlands has no local iwi, however has a close relationship with the local papa kainga Ngā Hau e Whā, “People of the Fours Winds” as a foundation for our Wharekura  Because of this it was decided to leave the Kōruru, Maihi, Raparapa uncarved as it felt that Te Ao Mārama was for everyone. Carvings would align it to the tūpuna of one iwi and their kawa which would be contrary to this.

Initially, Te Ao Mārama had no pare.  Several years later we were approached by a parent of one of our students who worked at Rimutaka Prison, and it was suggested that in return for some native timbers, the prisoners would be pleased to carve the pare for us.  The timbers were provided and in return we received a superbly carved pare so we were able to complete our whatitoka.

Te Ao Mārama has now been in use for over a decade.  It is a significant and highly valued part of our College, a place where students learn through tikanga and kaupapa māori, where our staff learn and promote Te Ao Māori and whānaungatanga is celebrated.